In 2013, we were privileged to be part of BluPrint Magazine’s list of 20 Young Outstanding Filipino Designers under 40. The article was beautifully written by Joseph Javier and clearly expressed our crusade to contemporize Filipino Architecture. Entitled THE NEW FILIPINO, we had a discussion about our beliefs and design practice, striving towards a NEW FILIPINISM in our architecture. 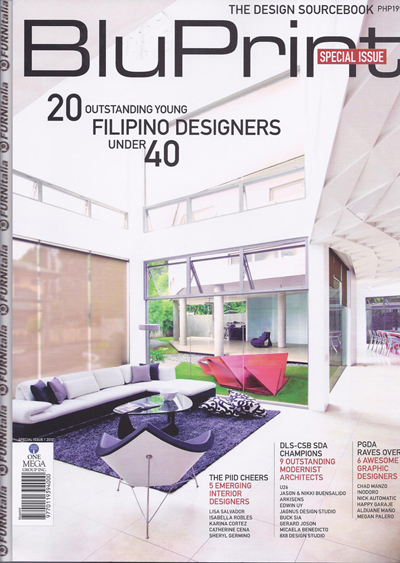 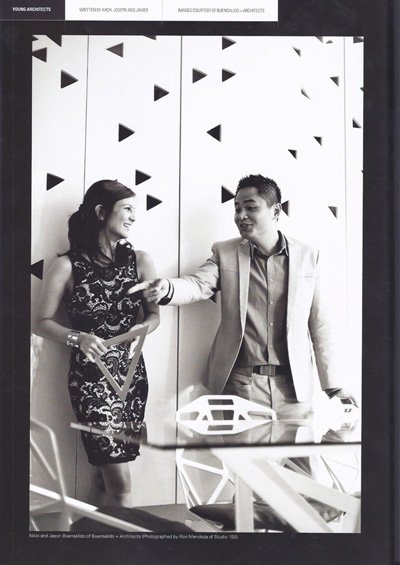 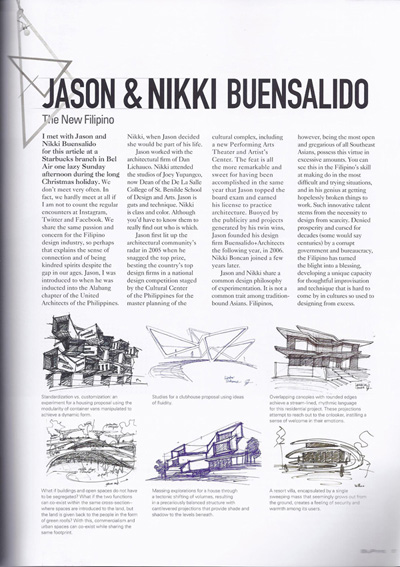 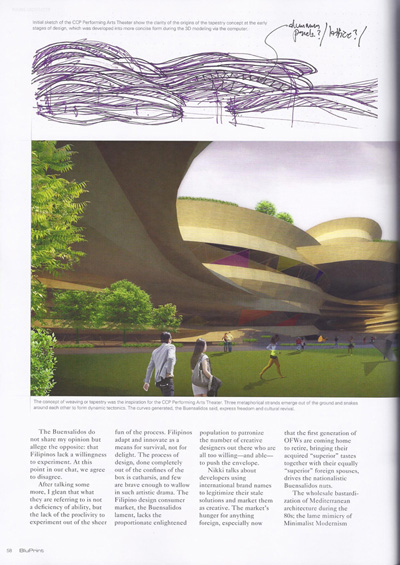 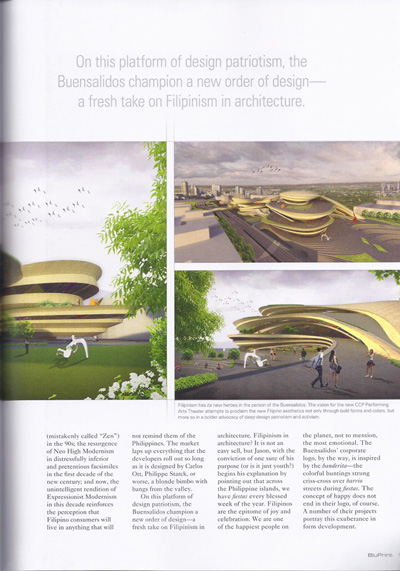 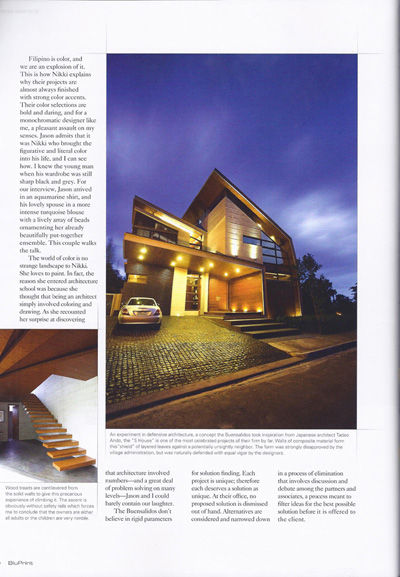 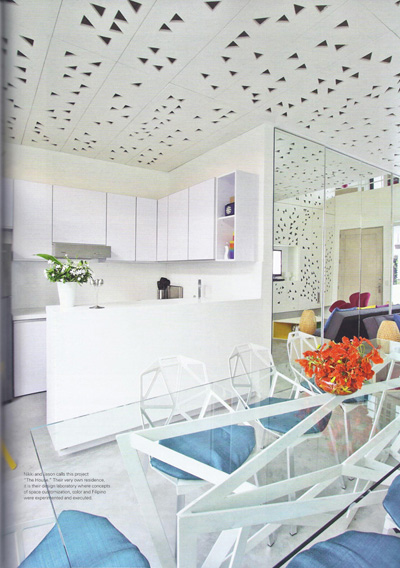 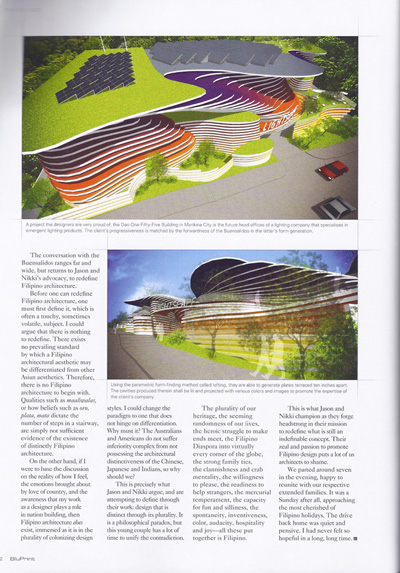 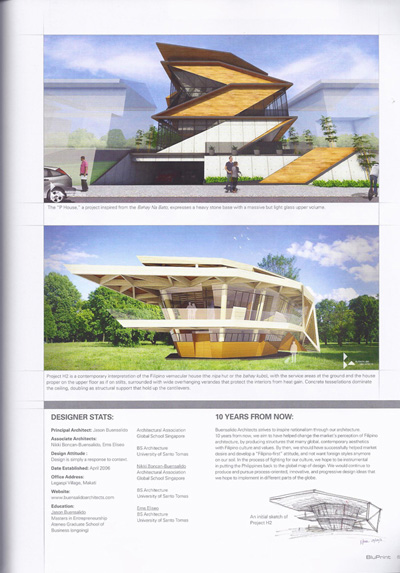 Sharing with you guys our latest completed residential project, S House, as featured in Daphne Osena-Paez’ webisode of Urban Zone. Thank you Daphne for providing a platform for us to share our ideas and spread our ideas on “Filipino Rennaisance”. Mabuhay!

Designing houses in the Philippines can be frustrating a lot of times for us. Since we practice contextual architecture, we do not believe in ‘themed’ residenial developments but instead believe in an architecture that is designed specifically for the place its going to be built, the climate there, and should reflect the culture and identity of the people using it. For this project, for instance, the lot is located within a strictly Mediterranean-themed development. We understand the whole point of having rules and restrictions in a subdivision which is essentially to achieve harmony within it. But since the village had a mediterranean theme, and houses there had little or no eaves, we were being restricted to have a maximum of half a meter for our eaves! This doesn’t make sense at all in a tropical climate because we need eaves and canopies and different architectural contraptions to be as long as they can be to protect our fenestrations from heat and rain (which happens to hit the house horizontally when combined with strong winds).

We essentially designed the house as if we weren’t governed by the theme. We designed it to be honest to it’s site, climate, condition, and client’s pramaters. We started off with the idea that as an owner or designer of a private house, we will never have control over the urban condition that surrounds our property. One day, it may look good, the next day, it may deteriorate because of lack of maintenance. The theme of the village, for example is something we cannot control, more so the attempt of the other homeowners to build a Mediterranean house but most often ending up wth a very poor and tacky copy.

Given this fact, we proposed a house that’s defensive. A house that’s inward looking, and whose back is faced towards the street, and whose spaces all are oriented towards it’s own controlled environment, in this case a courtyard in the heart of the house. By doing this, the spaces between the street and the courtyard become transitory barriers that protect the controlled environment within from being degraded by the uncontrollable harshness that our urban jungle creates such as noise from traffic, pollution, undesireable views, etc.  We used public spaces such as circulation areas as visual and auditory buffers that protect the private spaces from the outside world.

We proposed a house with projecting canopies to ensure the interiors from direct heat gain. We realized that if we push back the building line a bit back relative to the allowable building line, we can have longer eaves and canopies. In combination with this, we made sure that cross ventilation occurs throughout the house. The plans of the house are not deep, therefore making it easy for wind to exit through another opening as soon as it enters.  Even walls that open up to an internal hallway have transom windows, to allow wind to cut through. There is no room in the house whose windows are only on one wall effectibely funneling the wind to cut across the entire length of all rooms.

We proposed a house whose general form is still oriented towards the courtyard, articulated with a series of walls that act as if they were hugging and shielding the internal environment of the house from the outside world, made even more expressive by arraying these fins in shifting angles.

We proposed a house that is honest with its materiality – concrete is shown as concrete – raw and unpainted. Wood is shown with all of its grains and knots. Glass is kept as transparent as it can be. The imperfections of all of these materials remain unhidden.

We took a chance on the design as we believed that it represented the client’s preferences, and the cleint ended up believing in the design so much as well. We submitted the plans to the subdivision with our fingers crossed. Despite the theme,  and with a little push and a bit of argument, we had the design approved. Ever since it was built, the village has now been revising their regulations. The mediteranean theme has slowly been eased out as they realized that it was only a market-driven trend and there are now lesser and lesser people wanting to buld their house in such theme, especially after seeing that an honest house can turn out to be much more beautiful and expressive of who they are than themes that developers set. To cause things to change for the better, some rules should really be aimed to be broken.

The show this year was very interesting and exciting. We felt pride as we went around and saw the different designs that each booth offered. The whole place was oozing of creativity, originality, and world-class quality. On top of all of these, one of the major themes of this year’s show was to integrate and showcase our Filipino culture everywhere in the venue, while infusing contemporary ideas and interpretations with it. The after effect of this will surely be amazing, as some form of ‘culture revival’ is taking place in the design industry and will surely be wide spread right after F.A.M.E. Filipinos (who usually long for Western culture) will now realize that cultural manifestations of our nation, if interpreted in contemporary way, will attain a renewed identity – something that can definitely compete globally.

Here are some snapshots of our rounds. 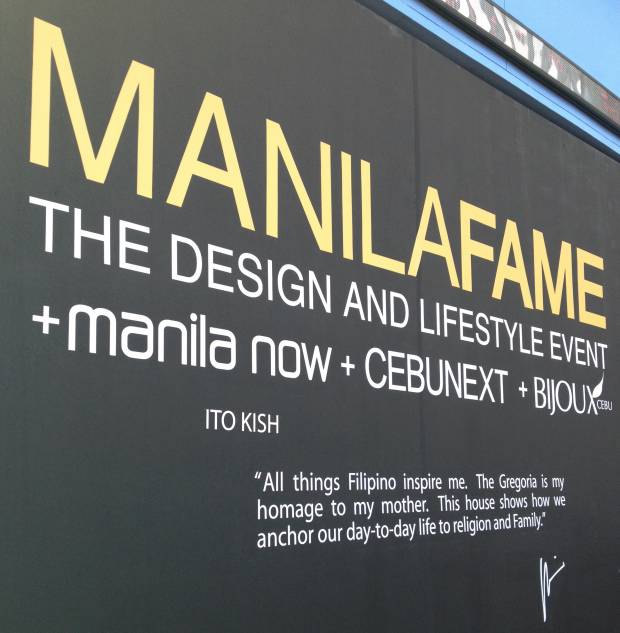 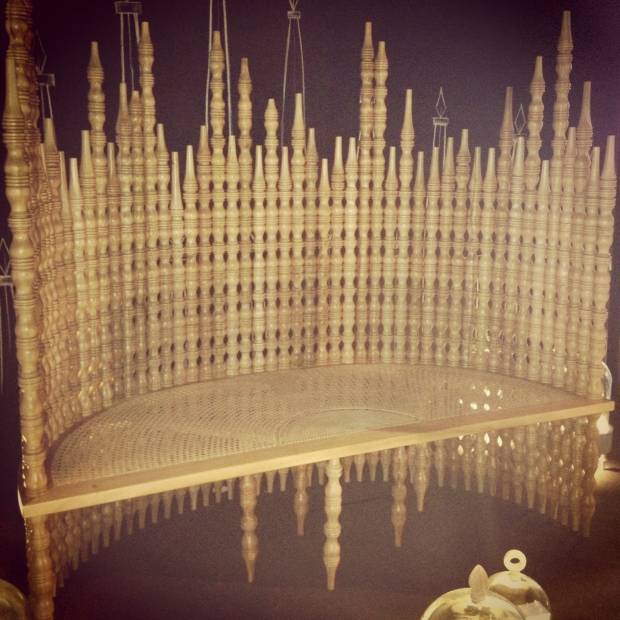 The Gregoria, by Ito Kish. Last year's winner for best furniture design. The piece is a tribute to his mom. Fabulous in actual! 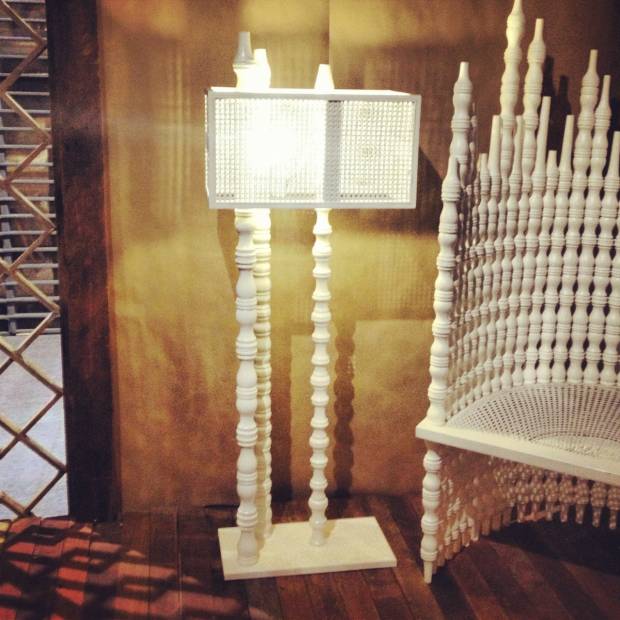 A new release by Ito Kish too. Spin-off floor lamp from the Gregoria. 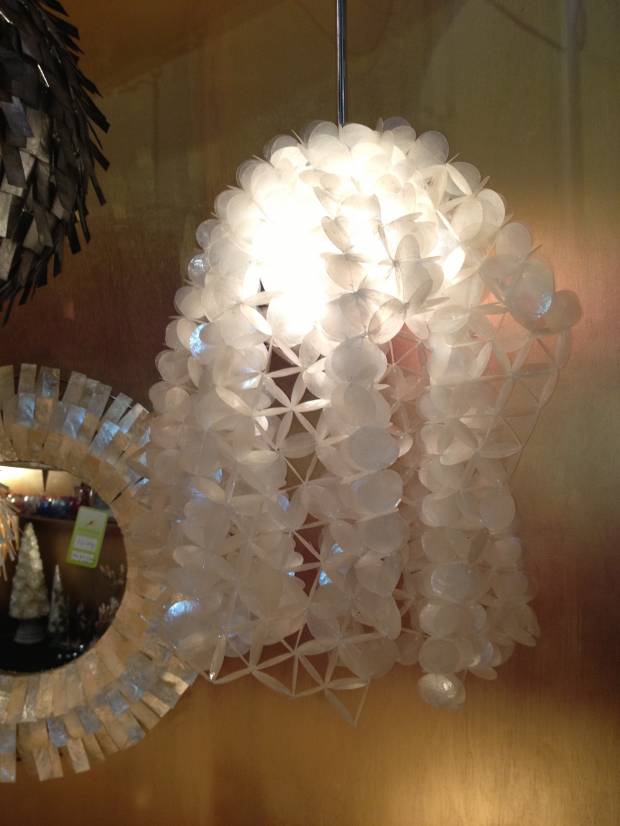 A tesselated lamp design from Robles Heritage made in Capiz. Interesting! 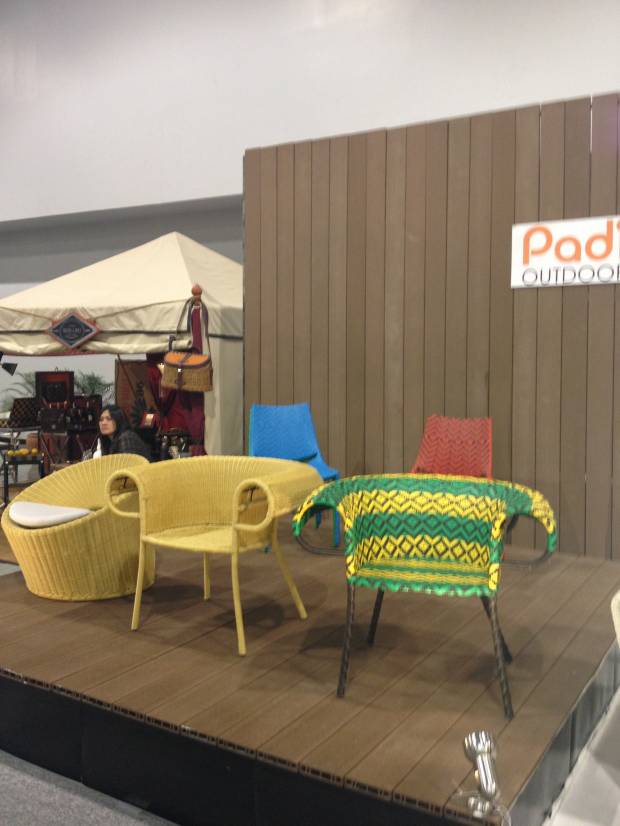 Color seems to be popping up more now. 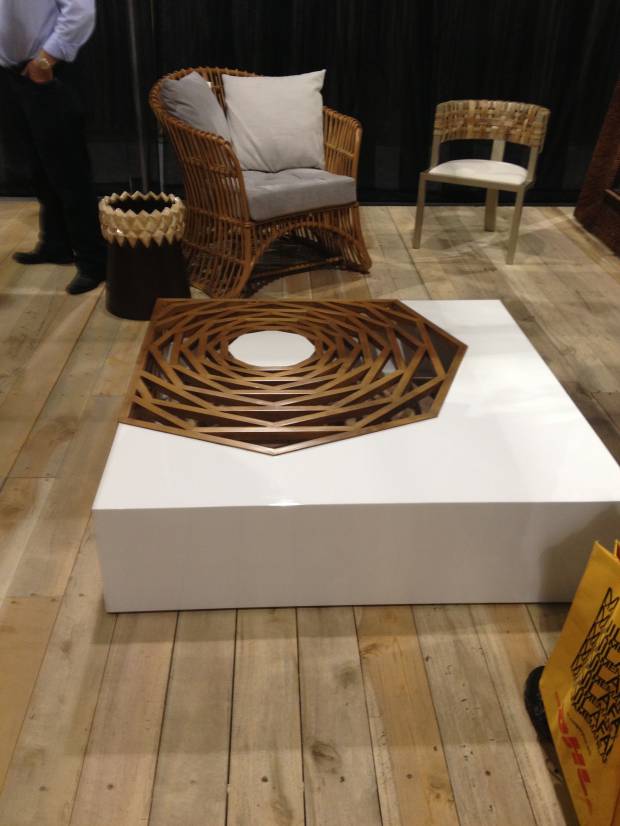 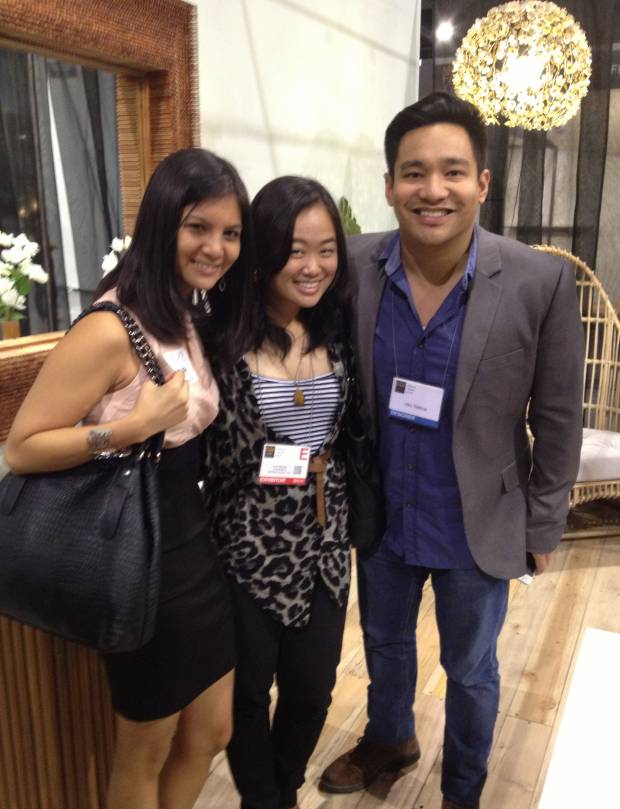 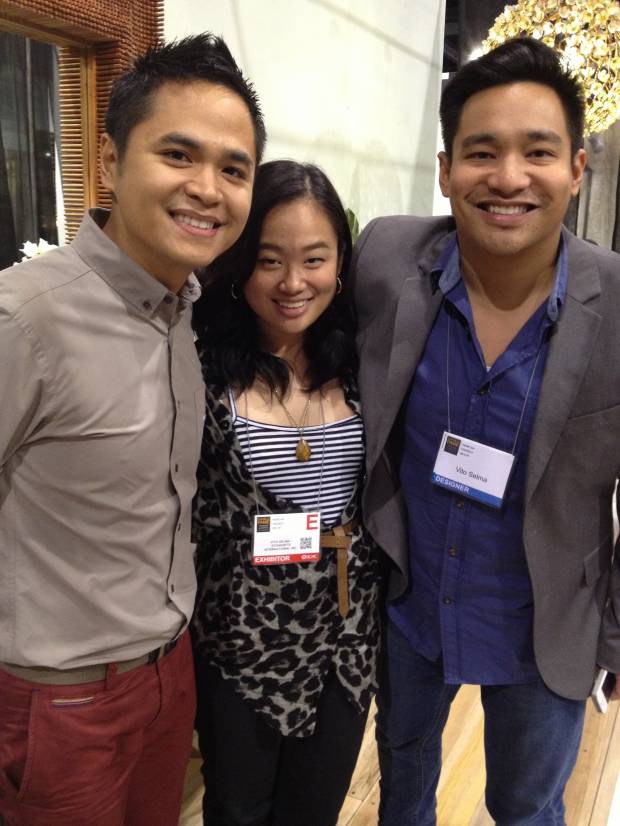 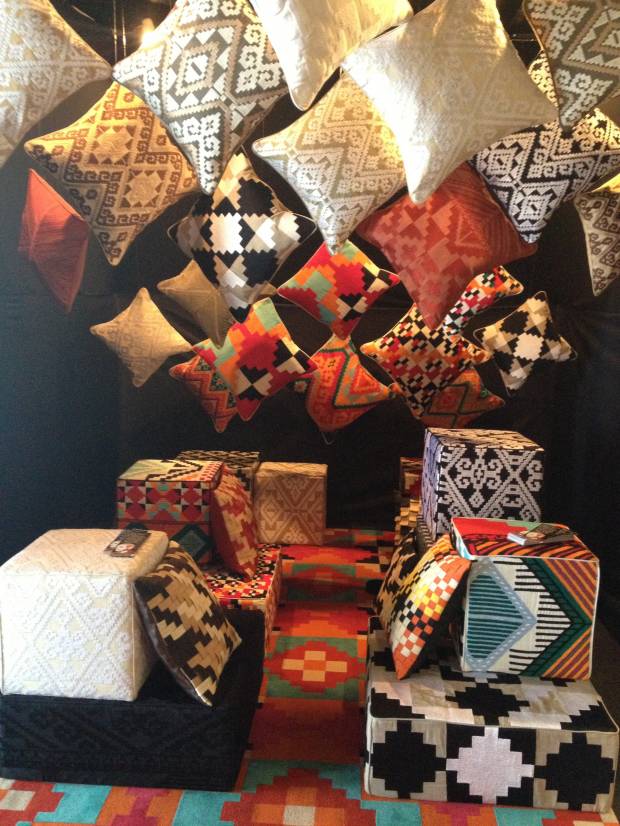 Fabric Designs by Inigo Elizalde for Catalina Embroideries Cebu. Notice how the designs are reminiscent of traditional Filipino weavings. We bought a few for ourselves!