Modernity: A Menace or A Promise?

What does it mean to be truly modern? How did modernity come about and how did it evolve in the past century?

My most recent adventure took me to “Fundamentals” the 2014 Architecture Biennale which is currently on display in Venice, Italy.  The exhibition, which runs from July 6 until November 23, 2014 is the 14th international architecture biennale exhibition entitled “Absorbing Modernity 1914-2014” portrays the century that has passed highlighting the influences that changed the parameters of modern architecture.  Some countries were ravaged by war, destroyed, divided, occupied leaving people traumatized yet these countries have survived and have come out stronger.  The exhibitions of the different pavilions from various participating countries show how the elements of architecture have survived and how they evolved to put up with the latest ideas and inventions of their time.    These exhibitions aim to perform an “audit” of architecture and posts questions such as: “what do we have?”, “how did we get here”, and “where do we go from here”.  According to Paolo Baretta, president of the Biennale di Venezia exhibition, the presence of the national pavilions representing 66 countries, show national identity and the country’s ability to become a protagonist in the cosmopolitan world of art and architecture.

The “Elements of Architecture” exhibit curated by well-known Architect Rem Koolhaas offers a new perspective on the elements of architecture that should form the relationship between us- our civilization and architecture. The exhibition compiles a new body of knowledge that explores the often universally mundane parts of a building and highlights its evolution.  The floor, the ceiling, the wall, the roof, toilet, windows etc. are exhibited and broken down into parts and how it was developed over the past century.  With great courage and ambition, Koolhaas mentions that he was able to review the history of modernity in the past hundred years, and offers a new perspective of those “elements” that should constitute reference points for the new architectural prototypes of the next century.  Afterall, these elements, being the simplest parts of a structure will essentially never be removed no matter how the next century architectural models evolve.

As one lands in Venice, the biennale is celebrated everywhere.  The exhibit spaces are divided into three venues and showcase not just architecture but art, dance, film, theater and a music festival as well.  The summer sun complemented the exhibit space at the Giardini Gardens as well as the Corderie dell’ Arsenale grounds where the architecture pavilions were located.  What was effective for this Biennale was that it was truly about architecture and not a tribute to the architects themselves generally making the exhibit communicate in a more universal language.  It highlighted in-depth research, discourse and discussion on modernization of architecture rather than a simple portrayal of various architects’ works which made the experience even more insightful.

Upon disembarkation from the Vaporetto, the taxi boat that takes you anywhere in Venice, we were greeted by a pylon welcoming us to the biennale and signs that led us through the grounds.  Our first pavilion was the Stirling Pavilion which houses an exhibit of the past century’s effect on various countries thereby ‘Absorbing Modernity’.  The pavilions post the question of national identity being sacrificed to modernity as the development of global architectural movements and technological processes took over the once local and vernacular architecture.  It turns out that each country has adapted and evolved from their individual experiences, be it war, new technologies available or natural destruction, etc. to create their own definition of modernity.  Images compiled from various pavilions show how each country has locally adapted to the miles stones of modernity. 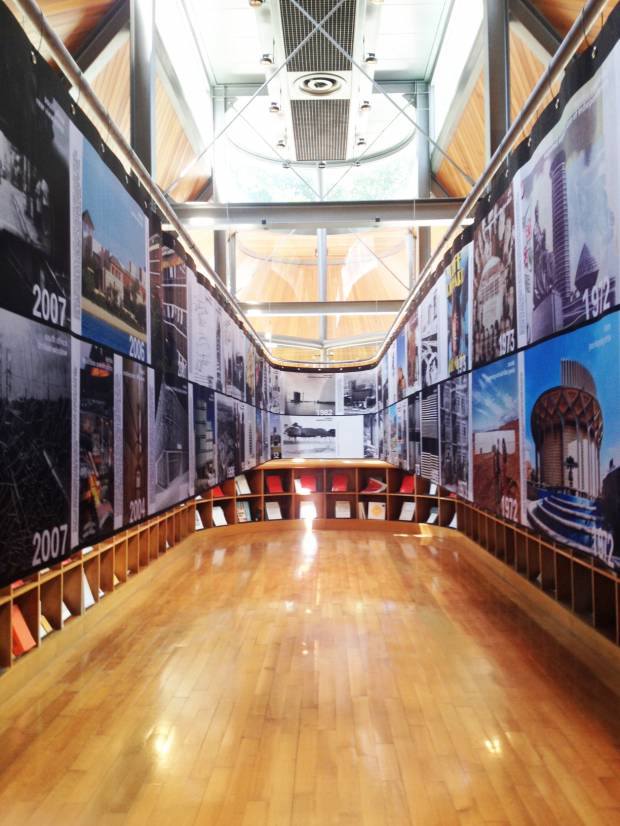 Rem Koolhaas Exhibition on his “Elements of Architecture” was also top pick on my list of exhibits.  Upon entry of the main gallery, one is greeted by a 1:1 installation of the ceiling.  The exhibit talks about how the modern ceiling has become a faux representation, whose main purpose is to conceal utilities within it, increasing in space requirements over time, effectively decreasing the served spaces below.  It was interesting to see how the utilities were initially placed on the floor early on in the century and how it has technology has allowed us to transform the way buildings and ceilings are constructed. 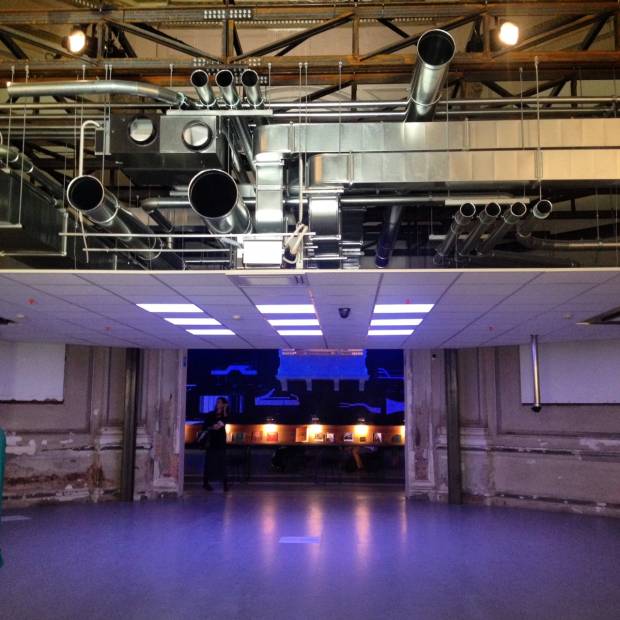 Rem Koolhaas' Ceiling – Rem Koolhaas shows how the modern ceiling has become a faux representation, whose main purpose is to conceal utilities within it, increasing in space requirements over time, effectively decreasing the served spaces below. 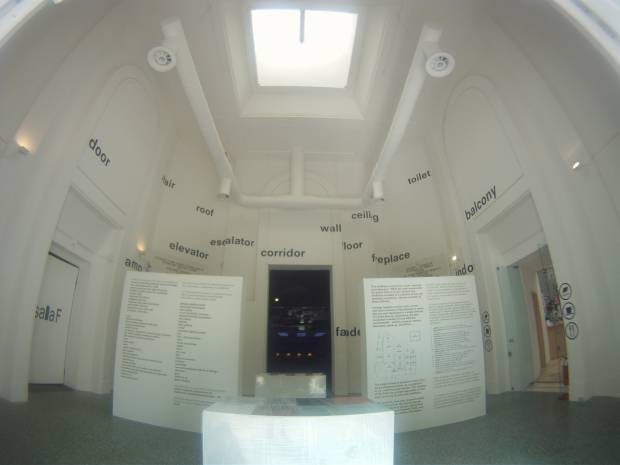 Fundamentals - The exhibition compiles a new body of knowledge that explores the often universally mundane parts of a building and highlights its evolution. The floor, the ceiling, the wall, the roof, toilet, windows, stairs, elevators, etc. are exhibited and broken down into parts and how it was developed over the past century.

Various wall cladding installations were also displayed and Koolhaas was able to show how temperature and climate change affected building systems and how they work.  It made me think of how designers are constantly looking for solutions to improve living qualities and building techniques and how sustainable materials are incorporated more often at this time.  This just goes to show that designers are now more sensitive to climate change and how information has been widely available to the vast majority.  Experimentation and new inventions help push modernity forward keeping building technologies at par with the fast evolving times because of globalization and the internet age.

Aside from the Central Pavilion where the “Elements of Architecture” were tackled, was caught my attention was the installation of the Architectural Association (AA) Students.  They replicated a 1:1 scaled model of Le Corbusier’s ‘Maison Dom-Ino’ which dates back to 1914. The structure was first designed as a prototype for mass-produced European housing whose design as been iconic images of 20th Century Architecture. “This initial installation will remind visitors not only of modern architecture’s most foundational project, but of an architectural instinct made even more apparent today than it was at the time of its original conception; namely that architecture always operates in the space created by a contrast between architecture as already known, and what it might yet become,” said Brett Steele, AA School Director. 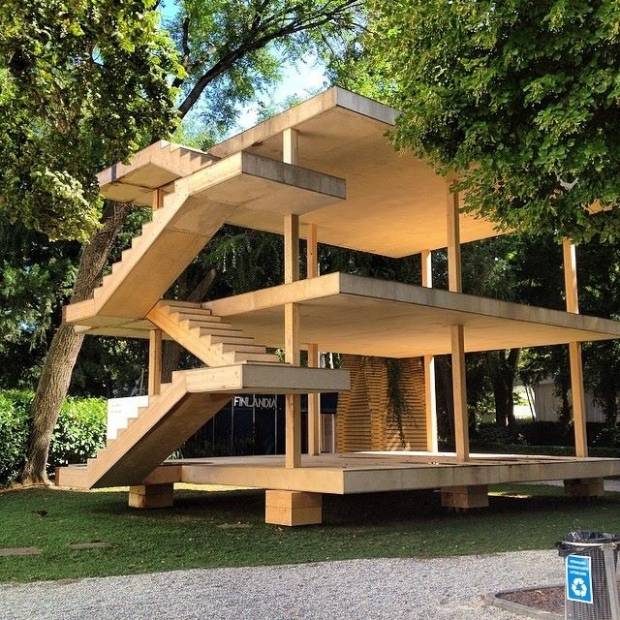 Le Corbusier's Dom-Ino - A 1:1 scaled model of Le Corbusier’s ‘Maison Dom-Ino’ which dates back to 1914. The structure was first designed as a prototype for mass-produced European housing whose design as been iconic images of 20th Century Architecture

The French Pavilion caught my attention because it was challenging the evolution of Modernity as a menace or a promise of a better built environment.  The French have contributed a lot to modernity in terms of architecture and engineering.  The research inside the pavilion questioned if the large scale monotonous housing structures of heavy pre-fabricated concrete panels answered the questions of economic scale or monotony in design and which of these should be taken into consideration more: Design or Utilitarian Function? On the other hand, they also showed how structures like this which were put up in 1942 are now undergoing the process of re-urbanization.

Overall, the Biennale led to me think about how modernization affects those living in this time and age.  A century ago, the concept of modernity was so different from what it is now.  An introspection of the past points out that modernity always had the intention of trying to innovate and trying to improve the way of life through technology and new ideas.  It has challenged us to think of new ways on how to evolve as each generation is an improvement of the former.

In some ways, modernization has also affected our social relationships and how we interact with one another.  Personal touches disappear as one is all too dependent on man made machines. Cultural identities in architecture are less pushed to give way to a standard way of doing things such as pre-fabrication to achieve efficiency. Family communications are now limited as social media through the internet has depreciated one’s ability to personally communicate with another. It could happen that a family lives under one roof, yet they don’t see each other for weeks physically, since they are connected to each other virtually anyway. At the same time, this same technology has allowed information dissemination and new to spread faster and more efficiently.  More people are aware of current state of affairs.

Modernity is positive except that we have to be extra sensitive to what it affects, especially our social and cultural values.  One just has to think of how to balance the menaces and the promised of this new and constantly evolving society.  So to answer the question on whether modernity is a menace or a promise. Well, I guess it can be both.