Last year, I had the chance to visit Seattle in the US.  My family and I took a 3-hour road trip from Vancouver, Canada to the border of Washington State in the US.  It was my first time in Seattle and I read from books that it was a gloomy city – always raining and cloudy.  Records of the local weather bureau point out that Seattle is ranked as one of the five States that receives the most amount of rainfall in a year.  This was what I was expecting and was prepared to get soaked but as we drove into the border, we were greeted by a warm and very fair day with wisps of clouds in the sky with the afternoon sun preparing to set in the horizon.  It was a pleasant surprise and I was excited because I only had 24 hours to soak in all the Architecture and the local flavor of the City. As dusk set in, we were driving into the curb of the apartment of one of our family friends, Cassie Lim.  Tita Cassie, graciously invited us to stay with her for the night and offered to take us around the city in the morning.

Being an architect, all the items on my Seattle Bucket List were all modern buildings.  After our first stop at the Pike Market to pick up our early morning breakfast at the very first branch of Starbucks, we headed towards the Seattle Central Library which opened in 2004.  The Central Library is the flagship building of the Seattle Public Library System and was designed by world-renowned architect Rem Koolhaas and Joshua Prince- Ramus of the Office of Metropolitan Architecture or simply OMA.  Right smack in the middle of a normal street with normal buildings, was this very expressive art piece.  As you turn the corner, the first glimpse of the building jolts you alive.  An American Institute of Architecture blog notes that this building was voted 108 on the list of Americans’ 150 favorite structures in the US.  The building also received the 2005 National AIA Honor Award for Architecture. At 11-stories of 56 meters high, the building is made of a diagrid structural system, bare concrete and glass.  The building’s massing is composed of a three structures piled, peeled and pulled off from each other in some angles enveloped a structural system that also acts as the skin of the building.  As if inviting users inside, the architects of the building wanted to allow people to still experience how to use books despite the fact that almost anything can be pulled out of the internet.  Koolhaas and Ramus wanted to make sure the program of the building’s spaces functioned as reading nooks and public spaces recreated as a “Living Room” with light filling in from the outside,  encouraging users read more books and stay lengthily inside the library.  The wanted to create a building that was functional and kinetic rather than static and imposing, which is usually how other old libraries look like. 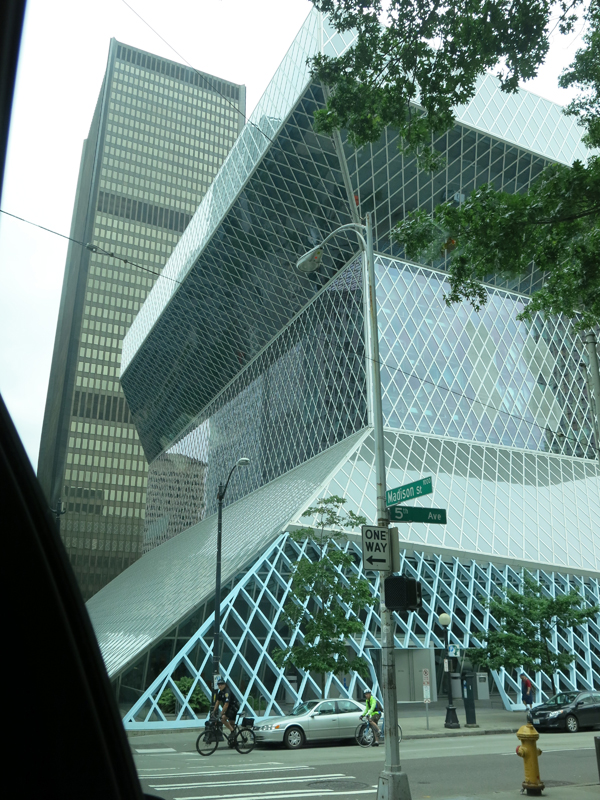 Right smack in the middle of a normal street with normal buildings, was this very expressive art piece.

Next stop was the Experience Music Project Museum or the EMP.  The EMP is located in the heart of the Seattle Center Campus where the Seattle Needle can also be found.  The EMP was designed by Architect Frank Gehry. Having been acclaimed for other famous structures such as the Guggenheim Museum in Bilbao and the Walt Disney Concert Hall in Los Angeles, Frank Gehry, another maestro in the world of Modern Architecture.  The EMP Museum is the home to some of the most significant eras of popular culture, science fiction, rock and alternative music.  Similar to its architecture, the museum is dedicated to push risk-taking ideas further so that it can fuel creativity of pop culture further.  The colorful reflective exterior of the building is made up of riveted sheet metal which changes its form as one turns every corner of the building’s façade. Frank Gehry describes the building to take the form of a “smashed up electric guitar”.  Our local guide mentioned that to some local residents, the building is reminiscent of a “crumpled piece of musical score sheet”.  What was interesting too is that the purple side of the structure is inspired by Jimmy Hendrix’s song “Purple Haze”. 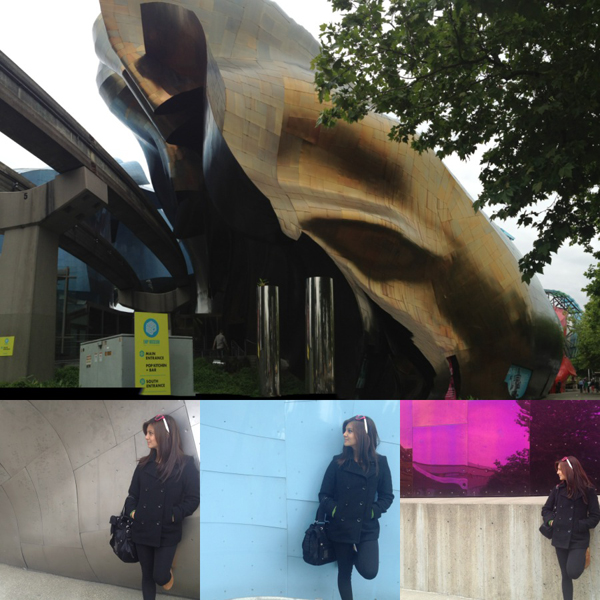 When I visit architectural landmarks, I make it a point to experience the building on all sides since some have entirely different angles and forms. The details of each particular structure also leave traces as to how the building was constructed and the though process that goes with the design concept. At every turn, the building contorted, bent and cracked to form crevices some of which formed pedestrian entrances and display boards.  There was even a hole in the building to allow the monorail track to slice through!

Sufficient to say that truly, creativity has no limits. Both the Seattle Public Library and the Experience Music Project Museum are notable landmarks in Seattle.  Both carry a distinct identity.  Both are avant-garde, modern and contemporary. The concept of reading and appreciating music is not a new thing.  The Seattle Public Library and the EMP Museum has just found new ways to allow the user to experience reading and listening to music in a new light.  These two buildings have successfully bridged the gap for the elderly and the young by introducing a new and tangible experience.  Both architects used normal elements such as books and music that we are all used to and translated them into something relevant for the current times.  They were able to translate it into something that the younger generation can understand.

Taking these into our local context, I hope that someday, we too can create modern buildings that are responsive to local context and local culture but at the same time these buildings may also allow our people to experience the mundane things in different ways. Allowing them to expand their knowledge based on personal experience is a more effective tool. I invite you to join me as I explore the adventure of life and as I relate a series of observations to dissect what the Urban Fabric contains and to go deeper than just mere aesthetics.