In 2005, I went to Shanghai under the First Philippine – China Youth Ambassador Program. During that time, I was made aware of the plans of China for the future. We were brought to the Urban Planning Exhibits of both Shanghai and Beijing where we saw how they were planning to announce to the world through urban design and architecture, how they have become the new super power.

Part of that plan was to host the coming World Exposition in 2010, so when I realized that it was nearing completion early this year, I told myself that I had to see the built form of the drawings and plans that were shown to me 5 years ago.

The World Expo 2010 is currently being held on opposite banks of the Huangpu River in the city of Shanghai, China, and will run only until October 31, 2010. The theme of the exposition is “Better City – Better Life”, signifying Shanghai’s new status in the 21st century as the “next great world city“. This is also the reason why I was so attracted to go – its because the theme of the whole expo is geared towards architecture and urban design.

People say that “everything in China is big”, and the stats of the expo simply reinforce this fact. It is the most expensive Expo in the history of the world’s fairs, and the largest as well, occupying a vast land of 5.28 square kilometers. It is the also the expo that is widely participated, with over 190 countries and 50 international pavilions present. More than 70–100 million visitors are expected to visit the expo, which would again, make it the most visited in history. After winning the bid to host the Expo in 2002, Shanghai began an enormous undertaking to reshape the city. More than AU$48billion was spent for the preparation, more than the cost of cleaning up Beijing for the 2008 Olympics. Shanghai was able to clear up 2.6 square kilometers along the Huangpu River; causing that involved moving 18,000 families and 270 factories, and 10,000 workers to be move elsewhere. Six new subway lines have opened between 2008 and 2010. Four thousand brand new taxis have been added in the month preceding Expo2010 opening. The city night lights have been once again improved, using energy-saving LED technology – all the structures on all of the main roads leading to the Expo are all beautifully lit, enhancing the anticipation of the Expo experience.

At the center of the entire expo site is the main building. Called the “Expo Axis“, it has world’s largest membrane construction and was built by SBA architects and Knippers Helbig. The building consists of columnar steel and glass funnels with a 1,000 m long membrane construction.

There are different pavilions scattered throughout the expo. First is the Theme Pavillions, exploring and showcasing different possibilities of sustainable urban development. They are called Urban Footprints, Urban Planet, Urban Dwellers, Urban Beings, and Urban Dreams.

What caught my interest though, are the national pavilions. Each participating country designed and constructed their own pavilions, highlighting their own culture and own urban proposals. As I mentioned earlier, there were about an abundant number of international pavilions, which was almost like going around the world within a few square kilometers. I wasn’t able to go inside all as one would have to fall in line for as much as 4 hours just to get inside the famous ones. But fortunately, with the help of my able body and passion for design, I was able to walk the entire site and see them all, even from the exterior. It was a such a wonder to see the latest design trends all over the world all in one place. The challenge for most of the designers for the pavilions was how to come up with a forward-looking architecture that would represent the principles of urban design, modernism, and sustainability, while keeping in mind that the structure is a temporary one, to be torn down after six months. What I noticed is that most of the pavilions were able to do this by the usage of “skins” – an architectural covering that is detached from the main structure of the pavilion. By doing this, the exterior nature of the pavilions can be designed to be so complicated, while the structural components can be kept straightforward.

One of the biggest one I saw was the 6,000-square-meter Canada Pavilion, among the biggest at the site, will feature an exhibition themed “The Living City: Inclusive, Sustainable, Creative.” The pavilion wraps around an open public plaza which doubles as a performing area, where visitors can watch the performances of Cirque du Soleil while in line to go inside. Its structure is wrapped with a slatted wooden skin, arranged in a facetted manner. 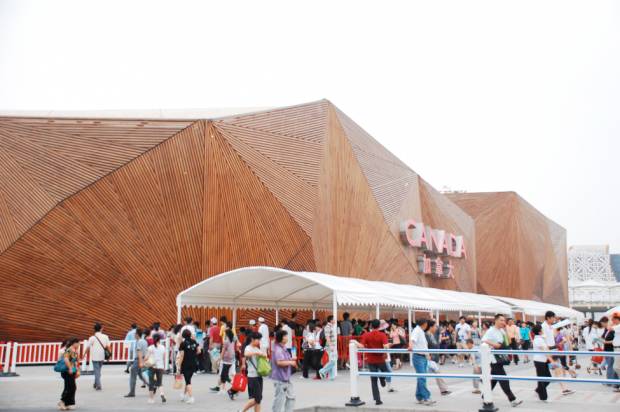 The Vietnam Pavilion could very well be mistaken as the Philippine Pavilion. From afar, it has a very simple box-like profile, but upon close inspection, it is actually covered with interwoven bamboo poles that achieve a very expressive cultural character. 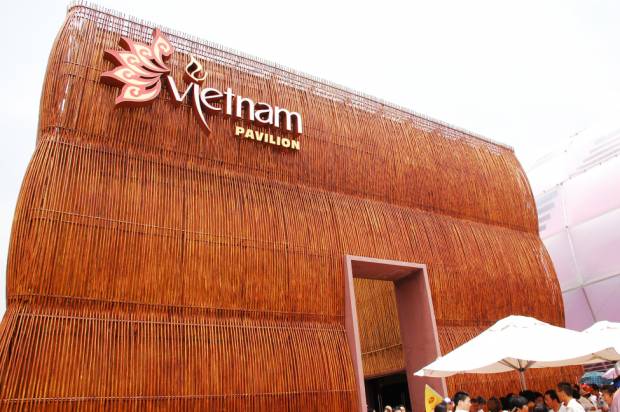 The concept for the Korea Pavilion is an amalgamation of ‘sign’ (symbol) and ‘space’: Signs become spaces, and simultaneously, spaces become signs. The exterior surfaces of the Korea Pavilion are clad in 2 types of pixels: Han-geul Pixels and Art Pixels. Han-geul Pixels are white panels with a relief of letters in four different sizes whose combination forms the majority of the exterior, mainly the peripheral surfaces. Most of the non-peripheral surfaces are composed of Art Pixels, which are 45cm x 45cm aluminum panels created by a Korean artist, Ik-Joong Kang. About 40,000 of these panels texturize the façade, contributing a bright palette of colors, hope, and unity throughout the Korea Pavilion. The surfaces will project different atmospheres during the day and night, with light and shadows creating different textures. Sequential lighting is installed behind the Hangeul Pixels to highlight the individual letters on the exterior façade at night, further animating the pavilion as a sign (like a text message) on a larger scale. 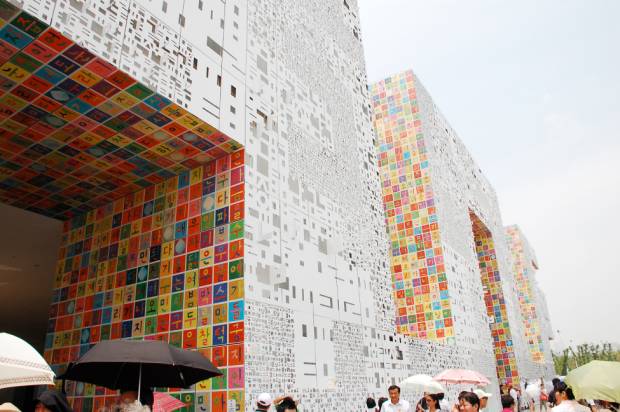 Foster + partners designed the UAE Pavilion based on the shape of sand dunes in reference to the symbolic feature of the desert landscape shared by all seven emirates. The peak rises to 20 meters in height and it is entered via a glazed lip at the pavilions base. light penetrates the building’s business center and VIP area through glazed vertical strips which illuminate the pavilion from  within by night. Its exterior is clad with a tessellated triangular panels that seem like gold, symbolizing the surge of wealth that the UAE has experienced. 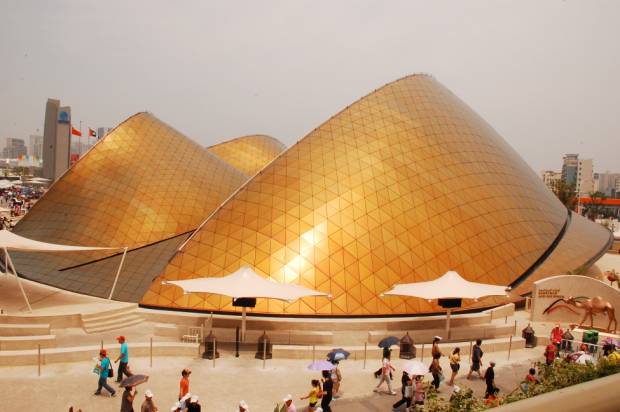 The Spanish pavillion is one of the most surreal pavillions present. From afar, it seems to take the shape of the Guggenheim museum in Bilbao, but instead of being clad in titanium panels, this one is clad with hand woven layers of wicker, each with a different pattern. 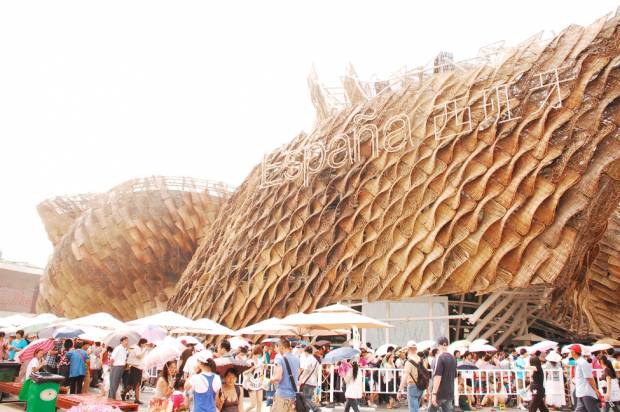 The UK Pavilion’s required the involvement of the Kew Gardens ’ Millennium Seedbank whose mission is to collect the seeds of 25% of the world’s plant species by 2020.  The design process evolved to produce two interlinked and experiential elements: an architecturally iconic Seed Cathedral, and a multi-layered landscape treatment of the 6,000m2 site. The Seed Cathedral sits in the centre of the UK Pavilion’s site. It is about 20meters high and is formed from 60,000 slender transparent fiber optic rods, each 7.5 meters long and each encasing one or more seeds at its tip. During the day, they draw daylight inward, illuminating the interior of the space. At night, light sources inside each rod allow the whole structure to glow. These rods are also tectonic, gently moving as the wind blows, creating a dynamic effect. 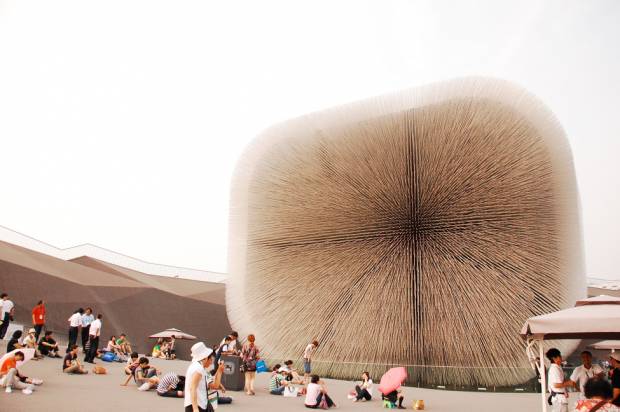 My favorite pavilion is the Denmark Pavilion by B.I.G. Architects. For me it is the pavilion that exudes the least effort to be beautiful. Basically, the pavilion is a double helix ramp, a big loop on which visitors ride around on one of the 1,500 bikes available at the entrance, a chance to experience the Danish urban way. At the center of the pavilion there’s a big pool with fresh water from Copenhagen’s harbor, on which visitors can even swim. At the center of the pool you will find The Little Mermaid, a statue that has become a symbol for Denmark (pretty much how Rizal in Luneta is to us). And this time, it will be moved temporarily to China. In Bjarke Ingels’ (the architect) words “it is considerably more resource efficient moving The Little Mermaid to China, than moving 1.3 billion Chinese to Copenhagen”. 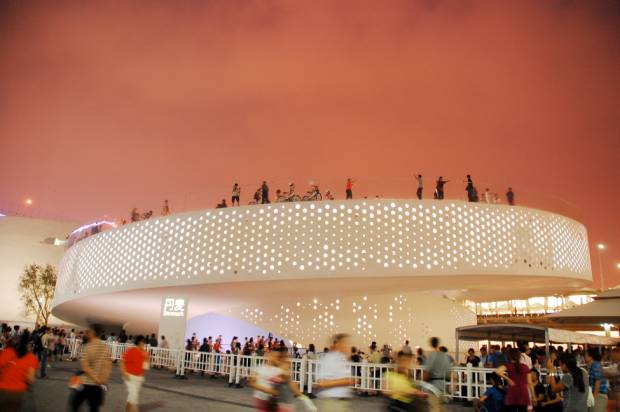 The pavilions are simply too many to be mentioned in this article. For me, it was an architectural smorgasbord that allowed me to see the trends that are happening all over the world. The experience of the expo would be different for each person. There are simply too many reasons not to go and see the Expo. I personally doubt that an exposition of this magnitude will be repeated in the near future so I personally advice everyone to go the Shangahi and take a trip around the world in 5.28 square kilometers.