In the book “The Alchemist”, the author talks about personal legends which are essentially a major goal of foremost significance that one wishes to achieve in his or her lifetime. For me, my standard answer whenever asked that question would be “To design a piece of architecture that would represent today’s civilization.” Just like how the Eiffel Tower, the Pyramids of Egypt, or even as simple as the Parthenon in Greece, all these structures have been significant in understanding of world’s past as lessons about culture, social beliefs, religion, and even technology are learned from them. I hope that one day, I would be able to make the same mark in our country. I dream of building something that would help people in the future understand who we are as a country today, very much like how the Bird’s Nest in Beijing represents the status of its nation now.

The Bird’s Nest, or the National Stadium, was the main venue for the 29th Olympic Games held in Beijing, China. It is a structure of utmost significance not only because all eyes all over the world were on it during the Olympics, but because it projected an image of such advanced development, willpower, and confidence for China. Personally, seeing it was very momentous as it is one of the most contemporary pieces of built architecture in the world and was a source of education and inspiration for me as I am a modernist myself. 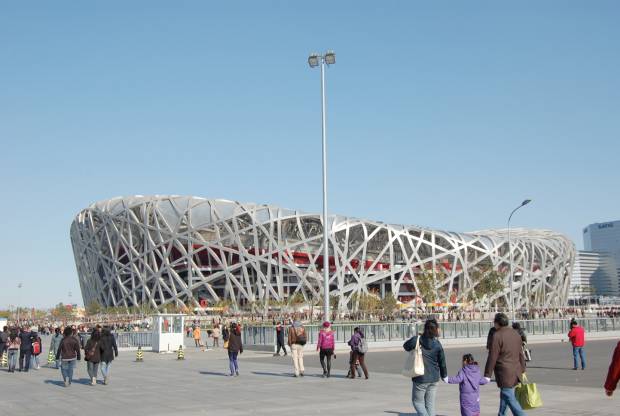 NEST-LIKE APEARANCE - The roof is suported by twenty-four trussed columns that is camouflaged by seemingly random steel lattice-work , forming the over-all esthetic of the “nest”. A common misconception is that the placement of the steel frames of the nest is random and has no purpose, when in reality, each half of the stadium is nearly identical and each steel frame in the nest helps the other structural elements support each other. Due to the stadium's resultant appearance, it was nicknamed "The Bird's Nest".

I have been reading about this structure as early as 2003 before the Olympic Games made marketing noise. After being awarded the right o host the Olympic Games in 2001, Beijing knew that it would take a lot of time, efforts, and processes to build a world-class stadium. That is why they started with a bidding process right away for the design of the structure, with multiple parameters such as a retractable roof, low maintenance costs, and flexibility for post-Olympic use. Thirteen Entire were short-listed, and out of this thirteen, the consortium of Architects Herzog and De Meuron, China Architecture  Design and Research Group (CADG), and artist Ai Weiwei, emerged as the winning entry. 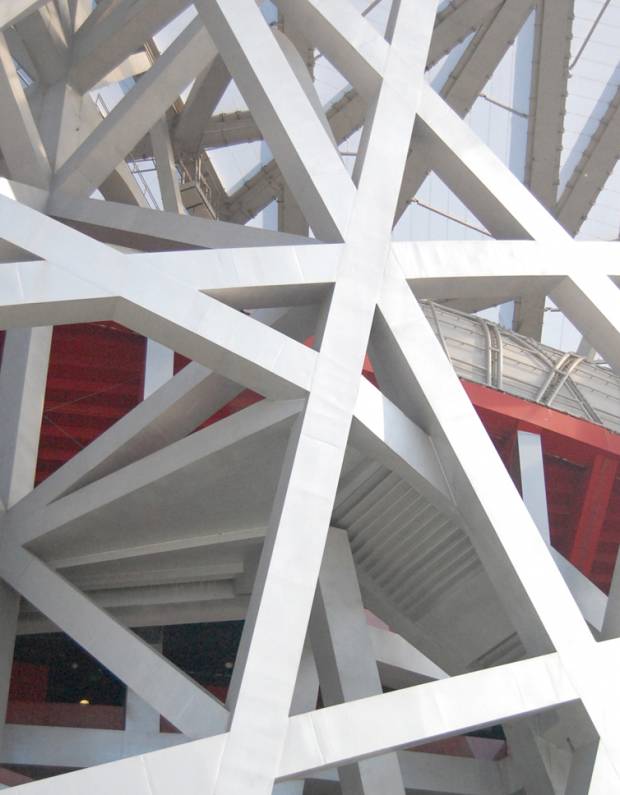 close-up shot of the NEST

The concept of the stadium originates from Chinese ceramics which had very parallel characteristics with how they wanted the building to be –  a “porous” stadium and “a collective building or a public vessel”. This led the team to a “nest scheme”. The stadium consists of two independent structures – a red concrete seating bowl and the outer steel frame around it. They stand about 50 feet apart from each other, forming an interstitial space that serves as the perimeter circulation space. 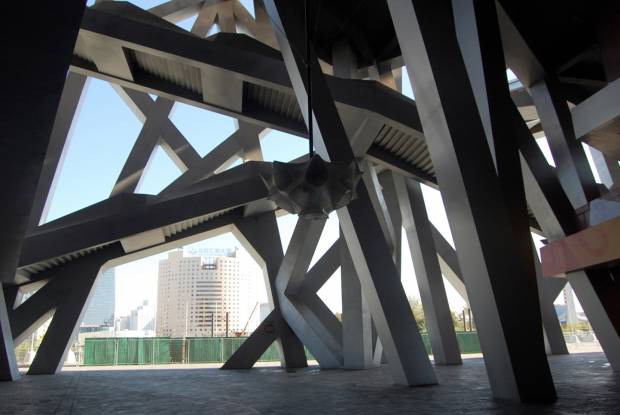 The interstitial spaces between the red bowl for seating and the secondary steel nest serve as the circulation spaces.

Much of the character of the stadium comes from the secondary steel nest that encapsulates the inner red bowl. As one of the requirements for the design was to have a retractable roof, the designers’ solution was twenty-four trussed columns that each weighed 1,000 tons. To camouflage these steel supports for the retractable roof, the team developed the seemingly random steel lattice-work to blend the supports into the rest of the stadium, forming the over-all esthetic of the “nest”. A common misconception is that the placement of the steel frames of the nest is random and has no purpose, when in reality, each half of the stadium is nearly identical and each steel frame in the nest helps the other structural elements support each other. Due to the stadium’s resultant appearance, it was nicknamed “The Bird’s Nest”.

But just like any other construction job, misfortunes happen. During the construction of the stadium, a portion of the roof of  the Charles de Gaulle International Airport collapsed. Its designer, French architect Paul Andreu, was also designing the National Theatre nearby, which led Beijing to review all major projects. They decided to eliminate the retractable roof, the original inspiration for the “nest” design, as well as 9,000 seats from the stadium, for safety and budgetary reasons. 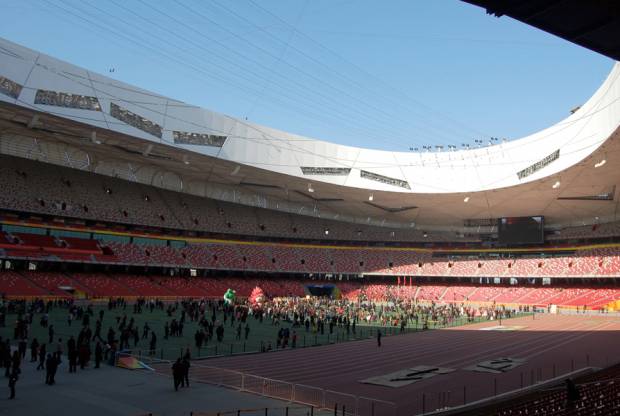 view of the stadium interiors, without the retractable roof

In line with the theme “Green Olympics”, the stadium also has eco-friendly features. A  rainwater harvesting system was integrated near the stadium which essentially collects rainwater and is used for non-potable purposes throughout the stadium after a purification process. For thermal insulation, the designers placed pipes under the playing surface that gather heat in the winter to warm the stadium and coldness in the summer to cool the stadium.

The stadium’s design originally called for a capacity of 100,000 people; however 9,000 were removed during a simplification of the design. The new total of 91,000 would be shaved further when 11,000 temporary seats were removed after the 2008 Olympics; bringing the stadium’s capacity to 80,0000. The farthest seat is 460 feet (140 meters) from center field.

One measure of how well an Olympic structure is designed is how it is going to be used after the Olympics. As for the case of Bird’s Nest, it will continue to be a host to a multitude of events after the games. Immediately after the main Olympics, it hosted the opening and closing ceremonies and athletic events of the 2008 Summer Paralympics in September 2008. In 2009, the stadium will host the It alian Super Cup finals – the traditional curtain raiser to the Italian soccer league season. Though designed for track & field events of the Olympics, the stadium will continue to host sporting events, such as football, afterwards. A shopping mall and a hotel, with rooms overlooking the field, are planned to help increase use after the Olympics. The designers envision this structure to be the most important public space in Beijing.

I was lucky enough to get a seat in a sports bar in Makati to witness the opening ceremonies of the Olympics live. I was able to watch the full coverage of all the grandiose and magnificence of the ceremonies. The Chinese grabbed this opportunity to show off how talented they are in the fields of dance, song, use of technology, and fireworks. The show was so moving and extravagant that even London already admitted as early as now that they will not be able to parallel the Chinese’s show of talent. In the midst of all of these, the Bird’s Nest was the backdrop. I was imagining at that point that all eyes all over the world were on the structure, appreciating and marveling about how significant the structure is and what it represented. I wish that one day; I will be given the same opportunity to design such a structure, ultimately achieving my personal legend. 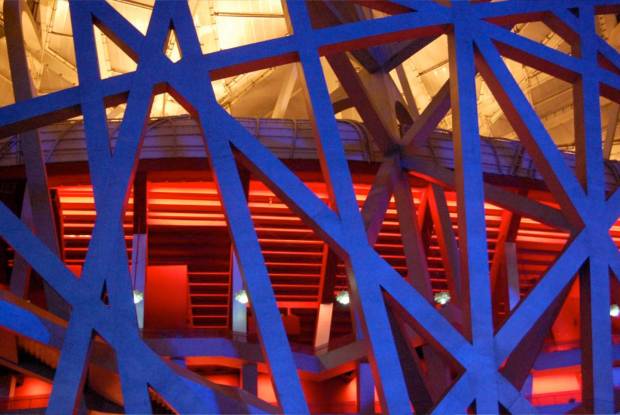